On a recent photographic retreat, I had a bit of a startle. It was the last night of our trip and after having mostly to completely cloudy conditions every night I stepped out by myself to take advantage of a mostly clear evening. I trekked on down to a split in the road in the middle of the valley. The moon had been getting brighter during our stay so additional light was not needed. In fact often when photographing the stars limiting any light source is recommended as it can take 20-30 minutes for your eyes to adjust to the darkness and to really take in the dark skies. So when absolutely necessary I will use a headlamp on a very dim red light setting.

The last couple of very early mornings we had heard the coyote calls nearby and did spot fresh tracks in the road. By nature, I am not easily frightened but am keenly aware of my surroundings in remote and dark situations like this. The only time I was concerned was during some night shoots I did in Africa, but that is another story.

Turns out the brightness of the moon and its proximity to the apex, or center and brightest point of the milky way, was going to prevent me from truly capturing what I was hoping to. So I set up to photograph the other stars and alternate views. One of these was the Big Dipper perched above the cabin we were staying in. We had also noticed that the last few days that we were the only people in the valley, no other residents or visitors were present. Not a single car or light was on. So while setting up and fine focusing my image near a fence line I thought I heard a sound. That sound started to get louder and appear to come towards me, almost as if someone was running. In the darkness, only lit by partial moonlight I could not see anything or determine what direction the sound was coming from. The ground began to shake and before I could register what was going on it all stopped a mere three feet in front of me. My heart nearly left out of me and realized that just in front of me was a horse that had charged at me and stopped at the barbed wire fence. As I caught my breath he just stared at me for what appeared to be forever but was actually more like five minutes. As I gained my composure and he was not moving I decided to make the most of the situation. So I pulled out my phone to utilize the flashlight to light him up. That didn't do the trick so I reached for my brighter flashlight I had tucked away and proceeded to paint the horse with the light. He was feeding by this point and the first three attempts he turned his head so it appeared ghosted. On the fourth try, he looked straight at me and I got him with the countless stars and the Big Dipper. 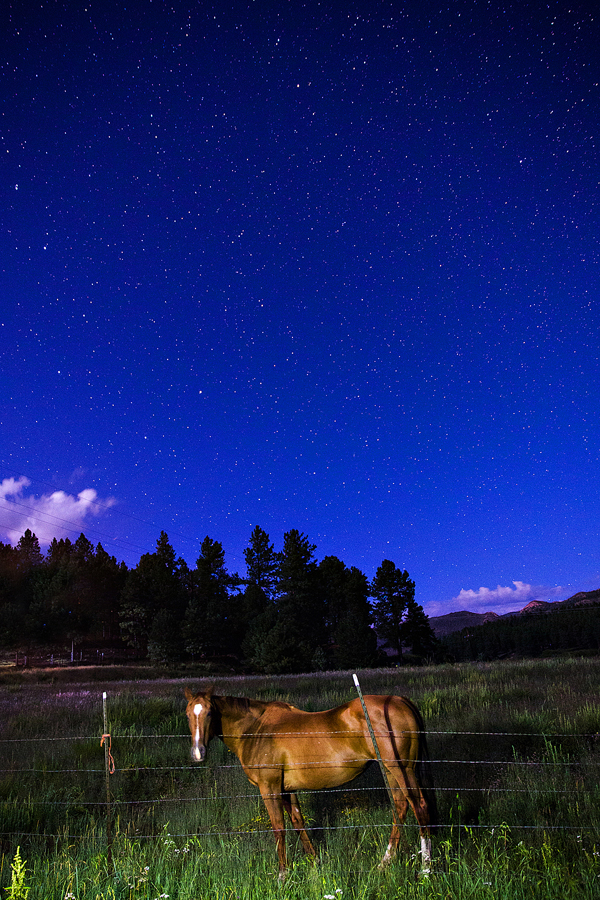 Thank you for signing up!

By continuing to browse or by clicking Accept Cookies, you agree to the storing of cookies on your device necessary to provide you with the services available through our website.